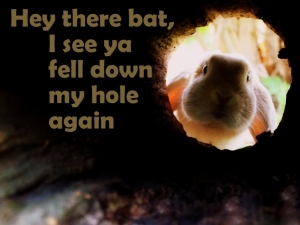 It’s not a complicated story or one of great import… just another face-palm moment for yours truly.

Some teens (high school students) protested at the Donald Trump rally in Columbus last week. Videos showed The Donald ordering them to be taken out (it happens to protesters, i have no beef with that except that he said they were so rude and i laugh… talk about the pot callin’ the kettle black!). i did take offense to the rally attendees who surrounded the teens – they shouted curse words, they said the kids “should be shot” , etc.

i don’t often comment on youtube videos, but i did then… politely. i also linked to another vantage point of the same incident – also a youtube video – when another poster asked about it.

“waw bat, shut up you faggot”

Okay… let’s let that sink in.

i was curious about the person behind the statement. i didn’t take it personally because, well, because it was ridiculous. i didn’t reply to it, because… well… why? Just sheer unadulterated stupidity. Still, i wondered what sort of person posts something like that? And then i went down the rabbit hole. Yikes. You think i’d learn. i clicked on the dude’s name to see what other sorts of videos he follows and comments he makes.

And then… further down that dark and musty hole i fell… ah… David Duke videos.

i sighed. i viewed one entire video (fifteen minutes of my life i’ll never get back) because i really wanted to know what good old Davie was up to these days. Well, for starters, he’s had plastic surgery (fairly well done, though, i must say) and some body building (way to keep up the meat-suit, Dave) and there is a gallant fight over his baldness (apparently he’s not okay with losing his hair… okay… his choice) but from his mouth spewed the same hate and hyperbole.

i sighed a lot.

And then i took a mental health break… and so i leave the same here for you. Imagine…