Ya gotta love a good ism

Ah, but “isms” are tricky. All of the isms are, really.  They are systems of belief… as soon as you slap that suffix on a word – any word – you start a ball rolling.  The suffix is one of action, of practice, and it suggests a certain devotion to whatever thing you attach it to, that’s for damn sure. There are countless examples of isms: racism, sexism, darwinism, agnosticism, communism, buddhism, and yes… feminism.

The suffix itself is value-free; no judgment comes with that suffix. It is a suffix of degree or commitment. It’s a suffix that says… “look, i believe this shit so much that i’m willing to do something about it” or “i’m reordering my life based on this doctrine” and that’s a powerful shift to make with the addition of three little letters. Case in point? Racism: that little “ism” at the end takes someone from “Yup, there is this thing called race and i see that” to “Race: it defines who i am and who they are… and i am going to use that distinction to marginalize other people”

It’s not the isms that trip me up so much this morning, but rather the gulfs created by our particular isms.  i don’t like the schisms created by the isms. Ha! sch-isms… but that’s a different etymology altogether, damnit… before we get all excited by that similarity. As soon as human types pick a side, we seem to set about demonizing the people looking at us across the divide. We DO love a good dichotomy, don’t we?

So why am i thinking about this today? Well it started when T shared this image on facebook:

Ah… beautifully said and wondrous. It reminded me of a specific person, so i forwarded it on to them (you GO, girl… you got this shit). Now here’s where being a member of the intelligentsia gets annoying… i couldn’t let it go because i wanted to know WHO said it. Off i went in search of its source which led me in many different directions and to all manner of “feminist” quotes and cute visual representations of what it means to be a woman – a strong woman.

It made me sad

It was disheartening because i realized that – in our efforts to gain equality – many women seem to think we must emasculate men.  Fun fact… that root comes by way of castrata. Seriously… castrate. There’s a mighty big leap from “hey, i don’t want to be disenfranchised by you” to “i’m gonna cut your balls off, dude.”

i pause here so the male readers can wince

…yes, you are still intact.

These knee-jerk reactions to marginalization are the oldest tricks in the book, yes? If i don’t like how i’m being treated? i will make damn-sure someone else is being treated worse.  If i am made to feel bad about myself? i will annihilate someone else. If i feel powerless? i will bully someone else.

Okay ladies, time to buckle up.

We need to stop doing this to men and to each other. Seriously. Yes, they (men in the aggregate) have been serious douchebags. Historically, they (especially the white ones in our society) have done some fucked up shit. It’s understandable that we are angry and it is completely acceptable for us to say “NO MORE” but we need to remember that men can be feminists too… and many are. 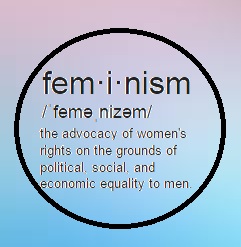 It is not always US and THEM and we do men (and ourselves) a disservice when we put them all on blast every time one of them does something stupid. Let’s face it, we don’t like it when we all get painted with the same brushstroke when one of us behaves poorly. All you have to do is google “feminist songs” and you will see a laundry list of songs that seem to perpetuate the notion that the only way for us to take back our agency is by bringing men to their knees (um… that can be fun too.. but let’s keep that for our sexy fun times, shall we?)

Men suffer behind inequality too… the dichotomy forces many of them into positions that are just as tenuous. One of my favorite graphical representations of this is in the old crimethinc poster which is, by the way, available here for free. 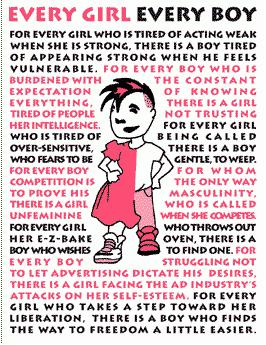 Now, before i look all high and mighty over here… i am far from blameless in this. i try to remember to qualify statements about men when i make them, especially in my professional role, but i am guilty of being snarky too and of saying things about men that i mean about a man… or a specific group of men.  For that? i am sorry and i can do better.

i wanted to find some quotes that are truly supportive of feminism… quotes that manage to celebrate the agency of women and their value without any sort of zero-sum game, because…

Those eschewing that system of identification altogether?
They are also awesome

i found these gems all over the internet, so i wish to add this disclaimer: These quotes were attributed to these authors, but i do not know if that is accurate. If i were publishing this for work? i’d fact check the quote sources.

“I do not wish women have power over men;
but over themselves.”

“The day will come when men will recognize woman as peer, not only at the fireside, but in councils of the nation. Then, and not until then, will there be the perfect comradeship, the ideal union between the sexes that shall result in the highest development of the [human] race.”

“Feminism is the radical notion
that women are human beings.”

“A feminist is anyone who recognizes the equality
and full humanity of women and men.”
Gloria Steinem

“Equality is not a concept.
It’s not something we should be striving for.
It’s a necessity. Equality is like gravity.
We need it to stand on this earth as men and women,
and the misogyny that is in every culture
is not a true part of the human condition.
It is life out of balance,
and that imbalance is sucking something out of the soul
of every man and woman who’s confronted with it.
We need equality. Kinda now.”

“Women hold up half the sky.”

And since i could not find any song that really spoke to the wonderfulness that is woman with (rather than versus) man, i give you a wonderful and rhythmic collaboration of the sexes and a favorite of mine: