A touch of serendipity today, i suppose. 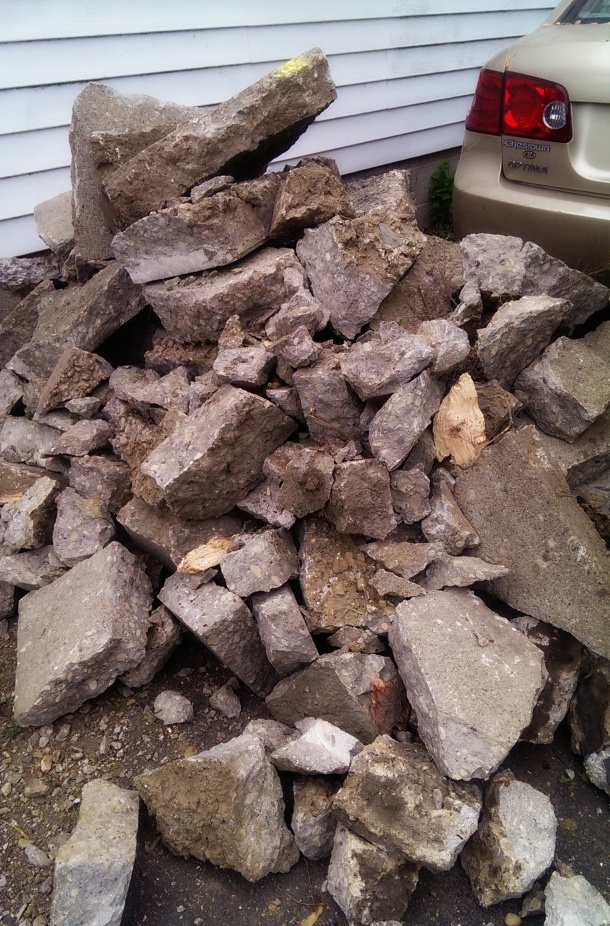 Pull up a chair, dear friends,

i met this DUDE with a TRUCKLOAD of… errr… um… possibility?

Was it fate that made the computer at work malfunction making me finally head towards the home PC to finish work before picking up the spawn? Maybe.

What was it that got me sidetracked – in my car – looking at pinterest on the phone, trying to figure out an inexpensive way to make bed edges and a walkway out back? i dunno, but i pinned a bunch, did some screen captures, and contemplated how long it would be before i could afford ANY sort of “fix” for that.

Was it also fate that took me up Indianola instead of Fourth? Perhaps.

And what sort of mechanism kept me aware to spot DUDE on a sidestreet moving chunks of concrete into the back of his truck? Probably part of the same wiring that told me to drive around the block to pull up to him… hop out… and engage him in conversation about where such concrete goes when it dies.

Less than twenty minutes later, DUDE was following me with that truck and less than an hour after that i’m tapping away at the computer after he unloaded it into my driveway. 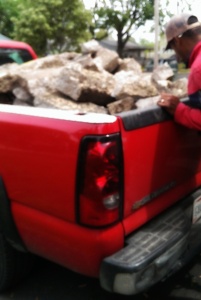 Oh hell, because why not?

Dude normally gets paid to haul it away but has to pay to dump it with the city but now? Dude gets paid 20 bucks to haul it to my house instead and unload it (no small feat).

i get a shit tone of concrete aggregate at pennies on the dollar AND a bizarre game of concrete-tetris ahead.

The environment wins… new concrete NOT produced, old concrete requiring no energy to bust it into reusable forms.

i’m wondering what the bitch is gonna say when she pulls in, though, so i’m warning her here…

Nothing needs to happen any time soon

Yes, the group is called CONCRETE BLONDE which is what brought them to mind today, with a driveway pile of concrete, but the song? The song is for C… my lullaby.

One thought on “you’re surrounding me so beautifully”